While legalization slowly but surely continues to spread throughout the United States, this progression is starkly contrasted by still-prevalent incarcerations due to possession and sale of cannabis. It’s legal in many states medicinally, and a handful recreationally, yet it is still a widely punishable offense, targeting mainly at Black people and other people of color. As our country continues to struggle with racial issues, police brutality, a global pandemic, and more, cannabis remains a relevant piece of the cultural conversation.

The War on Drugs 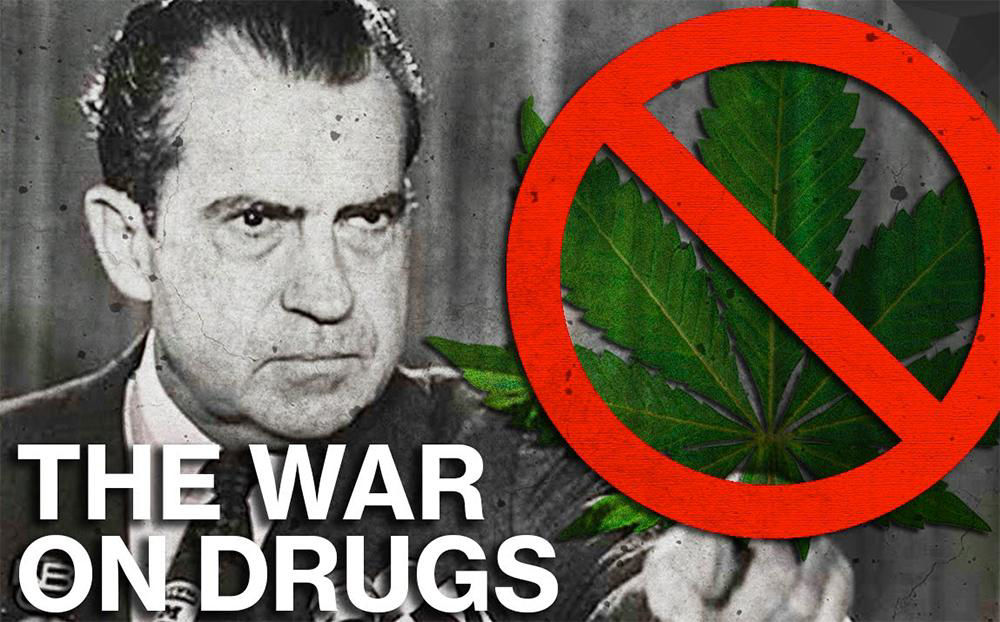 To analyze issues related to legalization and incarceration, it’s imperative to have a basic understanding of the history. In June 1971, Nixon officially declared a “War on Drugs,” stating that drug abuse was “public enemy number one,” likely commenced due to the rise in recreational drug use in the 1960s. Drugs became a symbol of youthful rebellion, political dissent, and social upheaval, so it’s no wonder why the government would do anything  in their power to bring that to a stop. Nixon’s anti-drug initiative increased the presence and power of federal drug control agencies, and pushed through measures such as no-knock warrants and mandatory sentencing. However, it’s not just the drugs they were at war with. Later in this blog we will discuss the true intentions of the drug war, and it's not as straightforward as some may believe. 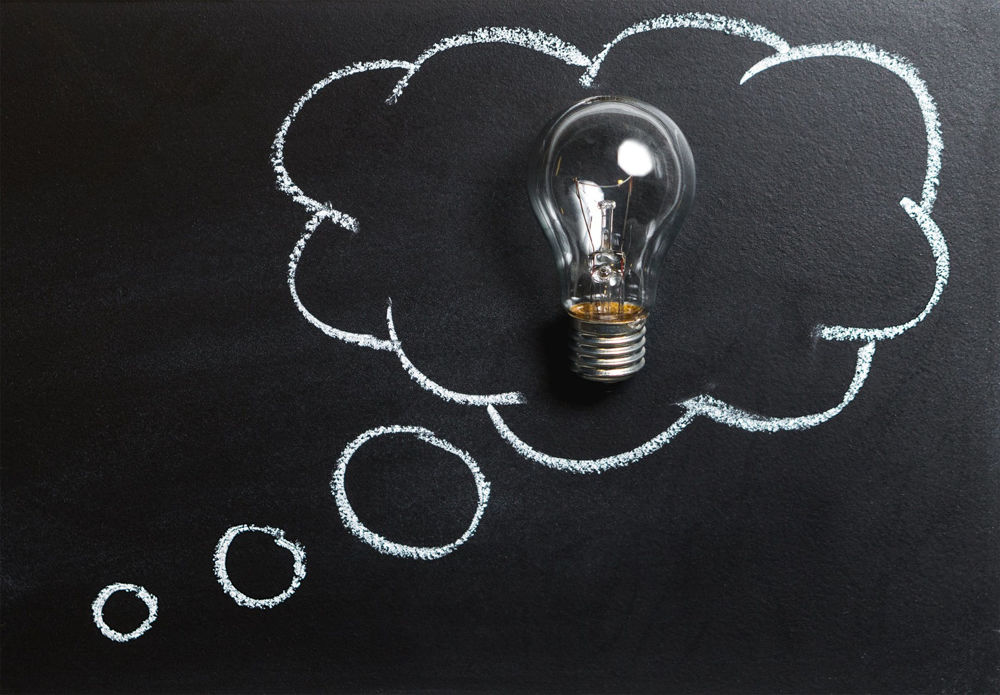 When it comes to marijuana policies, we are in an age of absolute contradiction and confusion. Hell, what era wasn't? With so much contrast in messaging regarding cannabis issues, it’s bound to create divisive opinions, as well as leaving some people unsure about where they stand on the issue. Weed is legal in 11 states recreationally, and in 33 states medicinally, with a slew of benefits and reasons for legalization that made that possible in the first place. However, it is still classified by the government as a Schedule 1 substance, right alongside heroin. Schedule 1, meaning there is "no currently accepted medical use and a high potential for abuse." This is a contradictory assertion in itself, because of the research that exists that poses the positives of weed and its legalization. In 2018 alone, over 660,000 people were arrested for cannabis. So, what is weed, really? A threat to society? Or a natural, healing medicine? Clearly, that topic hasn’t been agreed upon in any regard; hence, the state-to-state nature of its legality. 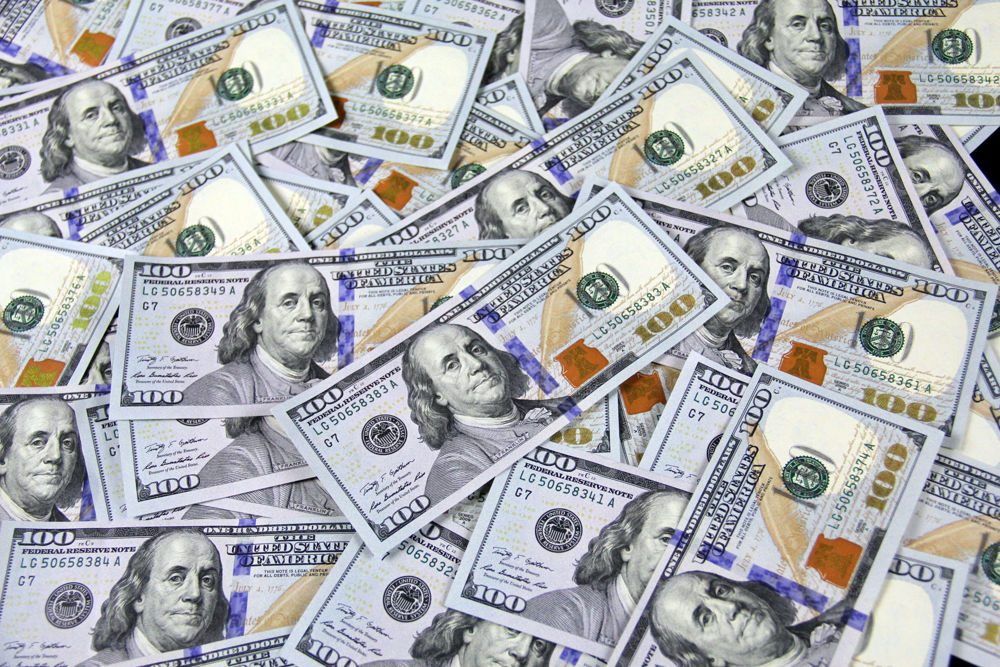 The cannabis industry is a multi-billion-dollar industry. In the United States, spending for legal cannabis is projected to reach over $16 billion in 2020. Not only that, but the industry was responsible for the creation of close to 340,000 jobs around the country. By almost all legal recreational and medicinal states, weed retailers have been classified an essential business during the current COVID-19 crisis. This means that weed shops, in this context, have been deemed akin to businesses such as grocery stores, gas stations, and the like - However, millions of Americans are still being persecuted for this same substance. To highlight just how high the level of marijuana-related incarcerations there are, think about the fact that in 2018, marijuana arrests comprised 43% of ALL drug arrests, which outweighs any other type of drug. This goes to show how villainized cannabis still is despite the positive activism and progression within this industry. However, these incarceration rates certainly don’t reflect average public opinion: Two out of three Americans agree with the legalization of cannabis, as is displayed in the graph below. 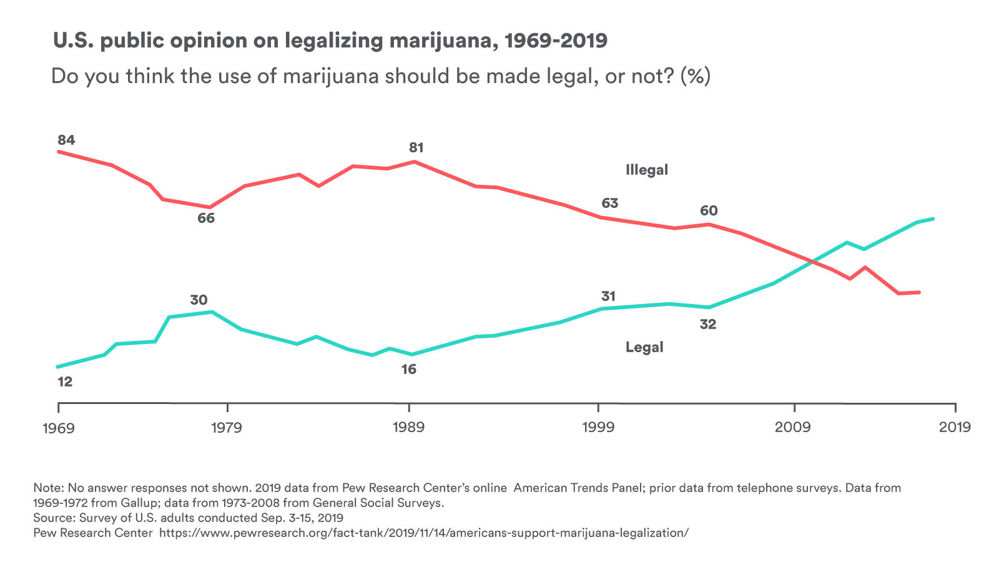 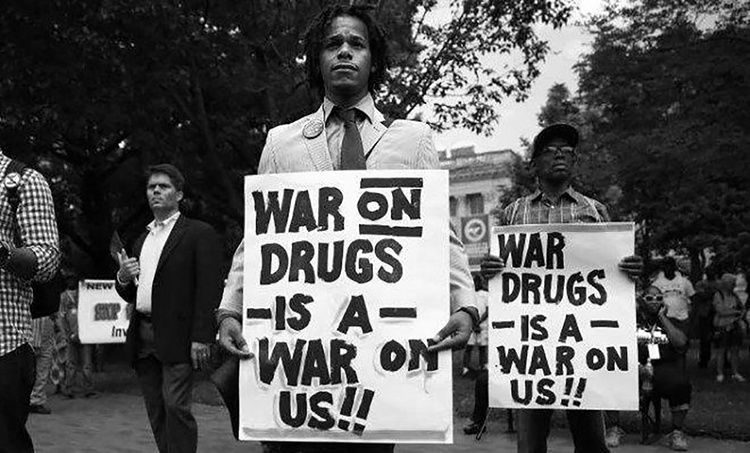 A huge part of this nuanced conversation about cannabis-related charges comes back to racial disparity. The first-ever anti-cocaine laws in the early 1900s were directed at black men in the South, and the first anti-cannabis laws in the 1910s and 1920s were directed at Mexican Americans and Mexican migrants. John Ehrlichman, a top Nixon aide, admitted years after the drug was in fruition: “The Nixon campaign in 1968, and the Nixon White House after that, had two enemies: the antiwar left and black people… We knew we couldn’t make it illegal to be either against the war or black, but by getting the public to associate the hippies with marijuana and blacks with heroin, and then criminalizing both heavily, we could disrupt those communities. We could arrest their leaders, raid their homes, break up their meetings, and vilify them night after night on the evening news. Did we know we were lying about the drugs? Of course we did.” The drug war was created to target minorities and those against the actions of the government. It’s fascinating, and tragic, that the drug war had far more nefarious intentions than getting their citizens healthy and off drugs. It was created more for the main purpose of suppressing and punishing marginalized communities. Racial disparity plays an unfortunate role in countless different issues, and weed is a significant sector of that.

Did you know that African Americans have faced nearly four times the number of cannabis possession arrests than White people, while consumption levels are approximately the same? This fact in itself is enough reason to explore the issue of racial injustice in the context of cannabis. According to the U.S. Sentencing Commission, out of the 2,000 people sentenced in 2018 for cannabis charges, 84% of them were people of color. Even while White people comprise around 60% of the U.S. population, they only made up for 11% of this number. In the same vein, another alarming fact is that in 2017, Black people made up for 27% of drug law violations, while they make up only 13.4% of the US population. No matter where you stand on cannabis, it is undeniable that these differences are unacceptable, and nonreflective of the true rate of crimes committed. It is clear that Black people and other POC are disproportionately targeted for crime in general, which is heavily reflected in these cannabis-related charges.

There's a lot of work to be done when it comes to the legalization of weed, and even more to be done regarding the race issues that so intensely fuel the high number of weed-related incarcerations around the United States. Country-wide legalization isn't even necessarily the answer to high imprisonment rates: It's putting an end to the systemic racism that this is all stemmed from.